2017 sees the return of the one time biggest draw for the UFC, Georges St Pierre. The former 170lb king faces the middleweight champion Michael Bisping at UFC 217. In yet another money fight, to add to the long list the promotion has been shooting for in recent times.

Having never competed at the weight previously. Owing to St Pierre’s status in the sport, he was gifted an immediate title shot in a division already teeming with top contenders. But that is the state of mixed martial arts in 2017. Follow the money and you will follow the logic.

But a lot has changed in 4 years since S-Pierre stepped away and not every fan is familiar with the former welterweight champion. With the explosion of the sport and a fan influx on the coattails of McGregor. Conor and not GSP now sits at the top of the money tree for the promotion. Garnering a following which has seen a meteoric rise to fame for the Irishman.

And now, with both men active in the sport at the same time. The likelihood of a potential matchup must be all too attractive for UFC’s new owners.

President of the UFC Dana White spoke with TSN Canada and admitted that any potential bout would have to take place very late in 2018 saying,

“GSP would need to defend his title first at 185lbs and Conor has some business to handle himself. It would be a year and a half down the road before we would even talk about that,”

Going on to say.. 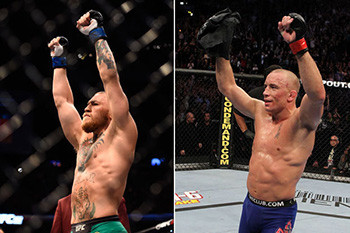 Teasing the idea of a potential super fight. White laid out the potential locations the fight could actually take place, adding.

For now, at least, it’s all pie in the sky talk. GSP himself has already mentioned that he may retire if he should lose to Bisping at UFC 217. Adding to that, if he wins, he is contracted to defend the 185lb title. Would a GSP who was defeated in a middleweight title defense still hold the same intrigue for a McGregor super fight?

A lot to think about and something many fans of both fighters will no doubt ponder. But for now, there are other people vying and getting both men’s attention.