Conor McGregor UFC 194 & The Extra Man in The Arena

13. Unlucky for some, but some men make their own… albeit with a little help. As Conor McGregor skipped under the lights of one of the most storied halls in all of fight sports, a sense of manifest destiny seemed to go beyond notions of luck or even reason. He came to represent a new Ireland, a combination of old and new, and they had come to show support for him in their droves.

Never was this more apparent than when the lights fell, and the soulful lilt of Sinead O’Connor gave way to the pounding bombast of Notorious BIG as the man himself made his entrance. He looked serene, smiling and nodding at the power of the occasion he had fashioned – but how could he not be, carried by that crowd? 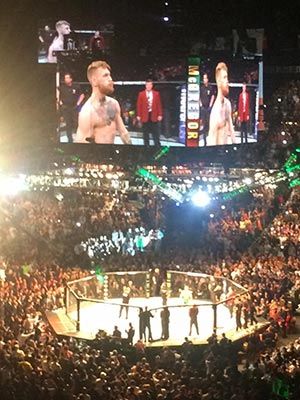 They themselves were bound in chorus by a song made famous by their fathers, a generation ago in Cagliari and Palermo. When the Drimnagh man stood on the lip of the cage and raised his gloves in knowing salute to the thousands who had made the journey in pursuit of a what the American MMA community seemed to deem a minor miracle, the chants of Ole Ole Ole seemed to rattle the rooftops.

By comparison, the entering champion, with a decade worth of wreckage behind him, looked skittish as he made his way. A tsunami of Irish roars rained down on him, and even as he held out his hands to trace the fingertips of the fans, the reaction on his face to the noise was that of a pattern interrupted – a winning ritual dismantled by a singing sea of green.

Jose Aldo 10 Years At The Top

In his ten years at the peak of the game, this was something he had never seen and couldn’t have prepared for. This was a people emerging from the shadow of recession, who finally had a hero to cheer for, one who could seemingly deliver at every turn and this was their moment to carry him to the gold. ‘Feel it coming in the air…’ sang Rihanna. So could everyone in the room. The fighter introductions were simply blown away by a cacophony of undeniable power.

Aldo took no lap of the Octagon, preferring to go to his corner and bow his head in preparation, maybe to blot out what had just happened – but still, that noise grew louder. When the time came to draw together, directed and flanked by extra security to hear the referees instructions, Aldo would not meet McGregor’s gaze, nor did they attempt to touch gloves. No more superficial contact was needed.

McGregor’s mental warfare having already been waged on stages as far-flung as Brazil and Canada over a 15-month saga and the Irish men and women who had travelled so far and spent so much to be there that night had fired the final cannon shot. 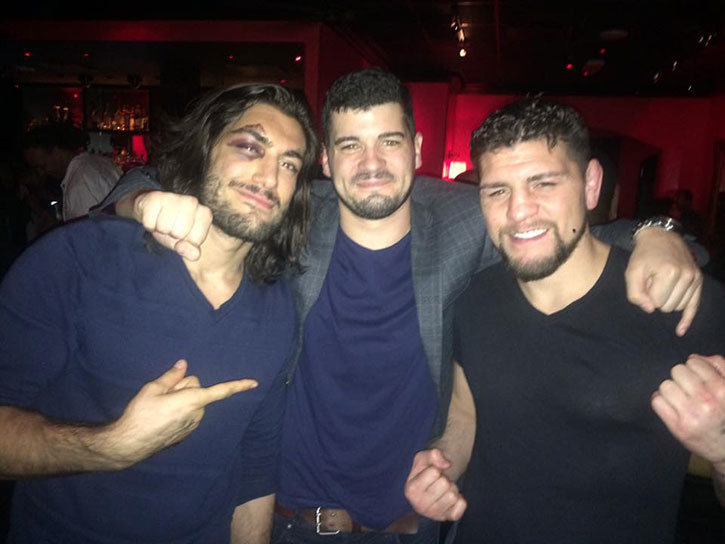 And then it was happening – a flurry of footwork as they went toe to toe, Conor avoiding a half jab with a darting half cycle of his head. In that briefest of moments, it was clear how much sharper the man in green looked, how much lighter on his feet – but I simply had no idea just how much this was the case.

Nor had I any idea that Jose Aldo, a veteran champion, would barrel forward blindly, overloading a right hand shot that, when viewed in hindsight, could only have been fuelled by all those staredowns, all those jibes at his nationality, ability and the affront to his protected status as MMA’s immovable object.

He would seek to show these unruly fans who the belt belonged to. The unstoppable force was coming however, in the form of Conor’s famous left. A liquid sidesteps and in it came, clattering Aldo just below the eye with a crunching precision, borne of calm. When it hit, the former champion’s body fell flat as a board, and the crowd gasped, united in shock and awe. Before John McCarthy came to his senses and tackled Conor clear, the man Jose had deemed a joker had rained down two more well-timed hammer blows. The court jester had been crowned the king, and the place exploded.

It’s Began to Rain Down Beer 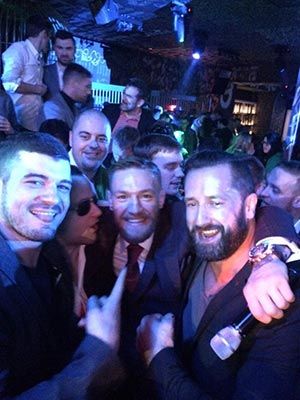 Pints of beer showered as Conor took his lap, smiling from ear to ear. Grown men who had never met embraced in the stands, as they had all those years ago in Palermo when O’Leary put one in against Romania. Aldo, in the tumult of the moment, sat stunned in the Octagon’s centre – his mind unable to accept what his body already knew.

When it did register, he began to weep. I have no doubt some Irish cried too, tears of joy for a sporting moment they had played certainly their part in. This country has had so little to cheer for, so few world champions for whom to raise their famous voices. They would sing long into the Vegas night, on the streets and in the pubs and clubs – but before they left, there was one more thing to do.

When Joe Rogan’s post-fight interview was done, Conor grabbed the microphone, and as he so often does, captured the moment in a single sentence – “Ireland, we did it,” he exclaimed, and every Irish voice in the room roared with delight one final time. McGregor may have had to win the title by himself – but he was not in there alone.