The Conor McGregor Mindset And Marketability

In recent months and years, I’ve been intrigued by the Conor McGregor story like everyone else. But something that’s struck me as distinctly different in “The Notorious” is his mental approach to his chosen profession.

It’s quite remarkable. I’m always interested in learning about the human condition. And how (sometimes) psychological ploys can have a beneficial impact on whatever an athlete or business person is trying to achieve.

After watching countless hours of McGregor interviews, he strikes me as a unique cat, to say the least. His almost superhuman confidence and belief in himself is so genuinely compelling and believable, it’s quite overwhelming. He strikes me as a guy who uses this to his advantage when projecting it directly into his competitors within mixed martial arts – through his candidly eloquent vernacular.

It must be intimidating no matter what they say, for fighters to come across this whirlwind of energy in their face both before and during a fight. He almost seems like a guy who treats the pre-fight trash talk as serious as the preparation for the job itself.

This was demonstrated to me beyond a reasonable doubt in recent days in an interview. With him and UFC head honcho Dana White, when the pair spoke on UFC champion’s Jose Also’s pull out of the upcoming mega-fight with the Irish man, only to be replaced by Chad Mendes.

McGregor said something very interesting to me in the television interview on Sports Center. When he mentioned that he thought Jose had been looking for excuses for months to get out of the fight.

He eluded to Aldo previously been a mentally beaten man from the world press tour in promotion of the event a few months back. And that he had in essence, wanted to avoid the physical part of the beating that he was going to dish out on him.

That in itself showed me you have a highly deliberate and astute athlete in Conor McGregor. A chap obsessed with every facet of his job, whether it be – training, mental warfare or media obligations. 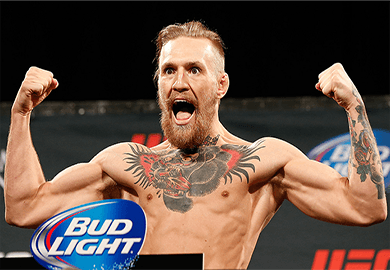 He has been compared in some quarters in recent times to Muhammad Ali, with some even going as far as calling him “The Irish Muhammad Ali”.
Although I suspect such claims are a tad premature, from a psychological aspect. There are certainly parallels in the two with their shared extreme confidence, a resiliently unflappable self-belief.

McGregor has said he gets this deep belief through his preparation, which makes sense. But I just wonder could there be a little bit more to it than that?
I remember watching Ali interviews and documentaries in the past where you got an insight into a very special man. Through extraordinary life experiences and struggles, he had to contend with.

I wonder could there be some unspoken stories about McGregor to come out one day. In terms of painting perhaps a more clear picture on what exactly has played a part in forming this almost sub-human-machine. Driven solely by the purity of singular thought in his pursuit of excellence within the fight business.

Time will tell, but I for one, can’t bloody wait to watch this remarkable warrior go back to work later this month in sunny Las Vegas.

By Niall Doran of BoxingNewsAndViews.com