Conor McGregor And His Search For Greatness

Conor McGregor moves through a forest of heavy bags, the three-letter logo looming large on each one: UFC. So too is McGregor branded, the gorilla tattoo emblazoned on his chest is slick with sweat, making it seem almost alive as he sets himself and begins another three minute round of drills on the heavy bag.

The heaving thump of hip hop on the gym speakers is interrupted only by the repeated thump of Conor McGregor striking the bag. And the ceaseless clicking of camera shutters. Around him, maybe fifty journalists huddle in hushed tones, watching him do his work. It is Media Day in his fight camp, and the world is watching. Not a soul says it out loud, but most of them are waiting on a miracle. 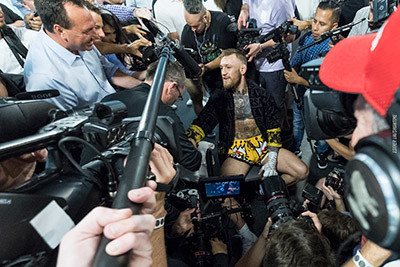 The man himself likely doesn’t see it that way. For so long now, his stock in trade has been the production of miracles, magically made to order. His has been a dizzying journey: from the Crumlin dole queue to the top of the worlds premier fighting organisation in just four short years.

In retrospect, it is clear now that the crucible of Chad Mendes, the spectacular demolition of Jose Aldo and his ultimate redemption against Nate Diaz only served to reaffirm what Conor McGregor already believed in his bones way ahead of time – that there simply was no other way things could have gone.

But for the rest of us mere mortals, who believe in silly things like logic, the feats he has achieved, and what he now comes to claim are not just implausible, they are nigh on impossible.

But what is impossible? As fight fans, knowing what we know, the term should not exist. Particularly when it comes to boxing were defying the odds is almost a tradition.

Zaire 1974 In the days before 32-year-old Muhammed Ali spectacularly crumbled a murderous pugilist ten years his junior named George Foreman. Both inveterate sportscaster Howard Cosell, and the watching world’s media couldn’t get enough of the word.

Tokyo 1991 Supposed cannon fodder and 42-1 underdog Buster Douglas chops Mike Tyson into ignominy. In the build-up, the term again reared its head over and over.

Las Vegas 1994 Come full circle to Foreman. He has now aged 45 and himself now the grand old man of boxing. He kneels in his corner, his hands raised skyward in prayer, having just knocked out the young champion Michael Moorer, recapturing the heavyweight title more than 20 years after his loss to Ali. No one in the press gave him that prayer ahead of time. Their assessment was brutal and typical.

Over and over in connection to seismic sporting showdowns, that same term has been on the tip on journalists pens and on everybody else’s lips. What those people forgot then, and what they seem to have forgotten now, is that in any combat sport, impossible is always impending. All it needs is the right fuel, and the tiniest spark can roar to life.

So now, two weeks out from what promises to be the most Pay Per Viewed event of all time, and with the same recurrent sea of experts telling us how it will never happen – I ask myself: can a miracle break the surface one more time? 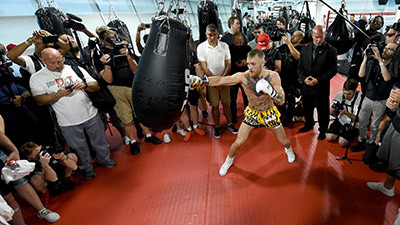 In 14 days I pack my bags, off to Vegas on a pilgrimage to witness what would likely be the most impossible happening of them all. I must ask, in my heart of hearts do I really believe that a man with no formal boxing experience will stop the greatest defensive boxer we have ever seen?

The truth is, I cannot say definitively it will happen. What I do know though, is that the fuel is there. Come fight night I’ll take my seat and see if it catches flame.

So what is the fuel? What in this world could possibly drive a minor miracle in Las Vegas in two weeks? The answer lies in an anomaly.

There exists in sport (and life) the concept of a flow state. Ever see footage of vintage Tiger Woods crushing tournament after tournament with cold precision in his heyday? Tyson blitzing through the 80’s heavyweight division? Over and over sporting titans achieve spectacular runs of success under the banner of business as usual – their dials set firmly to flow.

When Anomalies Enter the Equation

When conditions are optimal and things go as expected – a winning pattern is hard to break. It is only when anomalies enter the equation that the improbable begins to take hold. In short, when business as usual blips, then the impossible occurs.

We’ve all had that half an hour at the poker table, that hour on the golf course, that stint on the Playstation where we can do no wrong. What unsettles us then, and breaks the spell? What causes the wobble and eventual collapse? Over and over, it is the wind change, the momentary distraction, the disruption of normal service that continually generates these ‘against all odds’ moments. 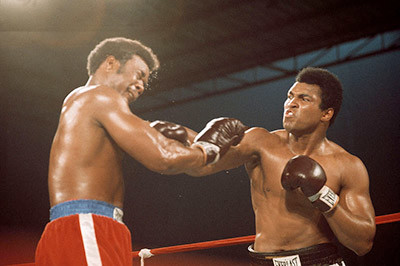 Take Ali and Foreman. Foreman had 21 KOs back to back in the lead-up, and every one of his opponents had chosen to meet him head-on, with typically disastrous results.

Come fight night, Ali, (despite promises to ‘dance and dance and dance’) proceeded to cling to the ropes in a now-famous but up to then unheard-of display, peppering Foreman with right-hand leads – a shot he had rarely encountered.

Throw in the bizarre venue, the Ali obsessed African people and the complete abandonment of Kentucky man’s famous shuffling skillset, the business became patently unusual. The end result was Big George toppled like a tree.

Flash forward to the oft-told tale of James ‘Buster’ Douglas and Mike Tyson. Iron Mike, for so long the boogeyman of boxing, was up to that point known for his relentless and brutal training. However, a shift in training teams and rumours of Mike in full party mode under the management of Don King clearly interrupted the flow. Add to this, in the days leading up to the fight, Buster Douglas had lost his beloved mother.

The numbing nature of the loss essentially dissolved the man’s susceptibility to the mythological fear factor so effective in mentally unsettling Tyson’s earlier opponents. He caught Mike early, creating a bad bruise under his eye. On top of all of this, Tyson’s kitmen had neglected to bring a cold compress to manage the swelling, which steadily worsened, and impossibility soon became reality.

It wasn’t long before a dazed Tyson was searching aimlessly on the canvas for his mouthpiece – down and out for the first time in his career. He said later he couldn’t see the final blow coming. A series of anomalies cost him his legacy.

George Foreman’s 20-year quest to regain the title he had lost so shockingly in Zaire was an anomaly fight from the get-go. After Tyson lost to Douglas, the heavyweight belt was sent on a merry go round. Eventually, it stopped and landed on Michael Moorer. 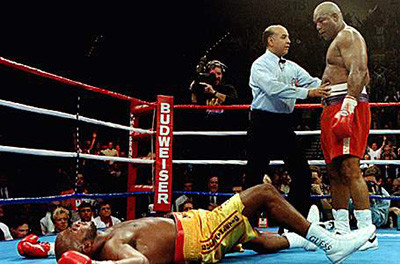 Moorer was notorious for mental issues already, and when faced a 45-year-old American hero on a quest for redemption, despite having all the statistical advantages, impossible was on the breeze.

Moorer’s trainer Teddy Atlas put it best, iterating the alien sensation he felt when he saw George emerged wearing the same fighting trunks he had donned in the Congo all those years ago. This was no normal night.

“I had to use all my discipline to push away negative thoughts when I saw that because what those trunks indicated to me was that there was a man who was facing down his past. He wasn’t running from his ghosts. He was confronting them head-on. I was scared. A guy who was able to face the truth that way was a dangerous guy.”

What Could be Mayweather’s Undoing?

Foreman struck hard on the button in the late rounds, leaving a stunned Moorer looking up at the lights, his title taken away. So where will the anomalies lie on August 26th in Las Vegas? What is the fuel that could be Mayweather’s undoing?

The first lies in his famous nickname, ‘Money’. Paradoxically, the man known for his fiscal prowess is for the first time in dire need of remuneration, under the pressure of an exorbitant tax bill. Why else accept a bout that would subject him to such ridicule and risk? He has asked for a delay in paying said bill, until after this fight is complete. A man needing money as never before is not operating in flow state.

The second factor is the sport of boxing itself, for the faithful watch their sacred cow for victory as closely as they watch Conor McGregor for failure. For the honour of the sport (an interesting concept given its history), their win must be emphatic.

The customary Floyd evening of hit and run will not be sufficient. This must be explosive and Hattonesque, sending MMA’s elected representative back to his octagon smarting, never to have the temerity to profane at their altar again.

The cold facts are these – when one comes out to fight, to strike with a counterpuncher such as Conor McGregor, one can easily go the way of Eddie Alvarez, regardless of your record – which itself would surely be in question without a finish that vaunted finish for the ages.

Speaking of that record, the man carrying it is 40 and has not competed in over 2 years. Do his diminishing ability and the spectre of eclipsing the record, and finally achieving 50-0 play into his thoughts? One would assume so – if these things didn’t he would not be human.

The Notorious One Conor McGregor 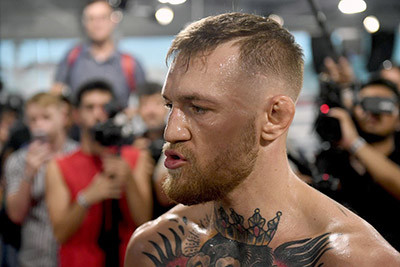 Consider finally his opponent – the x-factor that is the ‘Notorious’ himself. There is virtually no tape on this man in a boxing ring. Nothing to review and study. No apparent weakness to subvert or derail. Floyd’s team, for all intents and purposes, are flying blind into a storm.

They are headed for a younger, taller, faster and stronger opponent they know virtually nothing about, on the biggest night in their fighters storied legacy.

They could have avoided unknowns at this most crucial of junctures – instead, all of their chips are down on a hand they have not seen. There is a monstrous pride in this conceit, and it could come before the greatest fall of all.

Back in the gym, they have come to the twelfth round of the circuit now, and McGregor only seems to be picking up steam. He closes in on the final 30 seconds of his hard-fought session, those famous hands a blur as he drills underarm shots into a wall-mounted bag, over and over.

Owen Roddy, Conor’s striking coach, is shouting him on to the finish – ‘Shock the world!’ he roars as if addressing the doubters watching all over the world, as much as his own fighter. ‘No, bother to you!’.