Top welterweight Colby Covington is looking for a fight. Fresh off of his win over Demian Maia at UFC Fight Night 119. There seem to be no signs of Chaos toning down the combative rhetoric. Which put the ATT fighter front and centre in terms of recent media coverage.

Having branded the entire country of Brazil as a home to filthy animals, somewhat upsetting the Sao Paulo locals in the process. Covington has seemingly picked yet another fight with someone out of the left of field. And the person in question this time is the former UFC light heavyweight champion, Jon Jones.

Speaking with Submission Radio he went on to explain his reasons for bad-mouthing the former champion. Following his most recent fall from grace saying,

“I’m saying truths, I’m saying facts. I mean, I’m just speaking my mind. I didn’t know I wasn’t allowed to speak my mind in this world, I think I know him more than most people since I lived together with him for two years. The guy’s a fake, man, just… his little friking baby-faced tweets to Georges St-Pierre, it just got under my skin.

He Ain’t No Saint

He’s just trying to act like a saint, ‘oh, I’m praying for you.’ Shut up, man. Go do some more coke, go cheat on your wife some more, man. You’re a piece of crap dirtbag. He was difficult as crap to live with. The guy was dirty, man, he stunk, he didn’t shower, man. The guy was just a mess, man. He was getting into partying and all that bad stuff back then.

He was just going down the wrong path, but he always tried to act like a saint, ‘oh, I’m into religion, I’m all about god,’ this and that. He’s just fooling all the fans, he needs to be exposed for the real person that he is, because he ain’t this saint and good person like he tries to act like he is.” 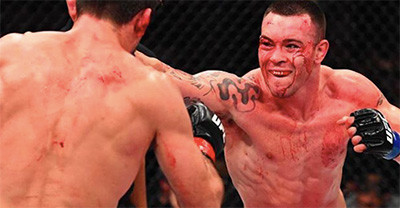 Not content with airing his thoughts on Jones. Covington followed up where he left off on the current welterweight champion Tyron Woodley. Looking to get back into the octagon in the first quarter of 2018. He wants the next fight on his contract to be vs Tyron “The Chosen Bitch” Woodley.

Covington goes on to say that he has no respect for Woodley and that their beef is real, saying,

Not Paying His Debts

“This is the type of dude he is. He brings out these guys for training camps, like four or five different coaches. And then he doesn’t pay em! When he makes an agreement that he is going to pay them a percentage of the fight purse.

So we take it then that Colby Covington won’t be getting invited to either the Jones of Woodley homes for Thanksgiving? Will all the focus and pressure he is putting on the champion, in the end, get him the fight? We will have to wait and see.

For now, at least, Covington is sitting pretty at number 3 in the UFC rankings. With both Stephen Thompson and Robbie Lawler in one and two. But with no sign of another title shot on the horizon for either. We could very well be seeing Chaos vs The Chosen One in quick time. Followed by a move to light heavyweight for Jones? Joke! 🙂