Forget Tinder, Plenty of Fish or even Elite Singles. There is always someone out there for you, all you gotta do is wait long enough and they will eventually show up in your life, it’s the Law of Attraction. Positive energy attracts and all that jiggery-pokery.

CM Punk’s assimilation into the fighting ranks of the UFC has become a long protracted affair with seemingly no end in sight. When he first announced his plans to join the ranks of the MMA worlds fighting elite, many chuckled. Now some 13 months on. Brooks has finally found his octagon soulmate in UFC newcomer Mickey Gall. And the best thing is he wasn’t handpicked by the UFC matchmakers to simply give Punk somewhat of a test.

After his win on the reality show Looking for a Fight, Gall made his feelings and plans known. He wanted to be the man to fight CM Punk. It was a marketing move straight out of the top drawer, played with perfect timing, poise and precision.

You could almost hear the penny drop as White whispered in the ear of Matt Serra that he had just called out Punk. He instantly knew he had his guy. All Gall had to do now was making his mark in the UFC and he was set to fulfil his destiny. 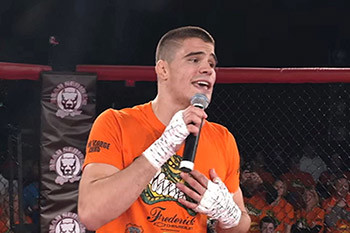 The 24-year-old from New Jersey seems like a likeable character who has nothing to lose and everything to gain from calling out the former WWE superstar and one of the biggest yet untested stars on the UFC’s roster. Here is a “kid” with personality, he can fight, he’s likeable and he’s untested in the UFC. Let’s throw him in there, see what the can do. .. And if he can get a W, well then let’s get it on.

Dana White himself may even have begun to lose faith in seeing CM Punk finally step into the octagon. But all that changed when the young up and comer inserted himself into the conversation. Being in the right place at the right time, saying the right thing. Mickey Gall has forced his way into a position so many in the sport had been looking to fill. It’s going to be very intriguing to see what he can now do with this golden opportunity.