Bj Penn Makes a return to the UFC octagon

“Everybody hates a prodigy, detests an old head on young shoulders”.

I remember my first time seeing BJ Penn (16 – 9 – 2) in action. It was way back in 2001 when he took on the the highly touted Din Thomas an already seasoned vet. Who came into their bout with an excellent professional record of (12 – 1).

At the time it was reported that there was a lot of hype around this Penn guy. Here was a guy in only his second professional fight, coming in against a veteran and some weren’t quite sure who was the favourite. But in the very first round, all those questions were answered!

The finish came quickly and brutally as Penn caught Thomas with a devastating knee that had him out on his feet. He quickly followed up with a flurry of punches and that was all she wrote. Although he had already fought in his first fight for the UFC just two months earlier. For many, this was the fight which signalled the arrival of the Prodigy on the landscape of mixed martial arts.

Penn had been approached by the UFC following his meteoric rise through the world of Brazilian Jiu-Jitsu. An already highly accomplished martial artist, having been the first non-Brazilian to win the World Jiu-Jitsu Championships, in the black belt division. While having only begun his training in BJJ just 3 years earlier and with many regarding him as having earned the fastest black belt in the history of the sport. Surely the writing was on the wall for this young phenom?

Born to an Irish American dad and Korean American mother, BJ stands for Baby Jay. The youngest of the three brothers, who were all given the same name Jay Dee, with the fourth being called Reagan. BJ wasn’t from the mean streets, yet he chose fighting as his path through life, stating on many occasions that fighting was just something he loved to do.

And let’s be clear on this, BJ Penn has never backed down from a fight. Which in reality was a contributing factor to many of the losses in his later career. Never fearing a move up in divisions he took on fighters who held a significant size and strength advantage over the smaller Penn. You have got to remember he has been fighting from featherweight, right up to an open weight class fight against Lyoto Machida, where Penn came in at 86.5kg with Machida tipping the scales at 102kg. But you see, that’s just Baby Jay! Always ready to test himself, no matter who the opponent! 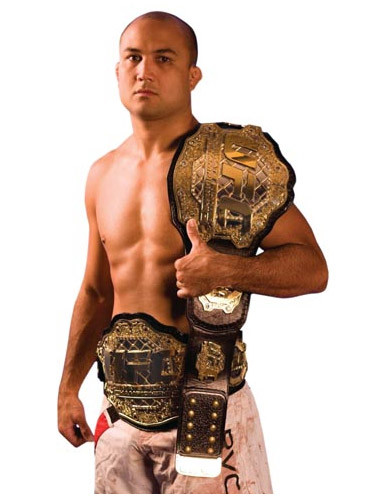 There is no question that Penn brought a unique set of skills and talent to the table. Displaying amazing balance and dexterity as guys repeatedly tried their hardest to take him down. While he hobbled around with one foot on the floor and the other being cradled by his opponent, as he mercilessly punched them in the face.

It was almost like there was some strange magnetic force holding up the Hawaiian, which rendered his attackers single leg takedown attempts ineffective. And if and when BJ did finally end up on his back, you were then in his world.

Prior to the arrival of George Saint Pierre, the range of skills which BJ brought to the cage signaled a new era in the ever-mutating sport of MMA. Penn had already been fighting in the UFC for three years prior to his controversial loss to GSP in his welterweight title shot.

Following the fight, Penn’s complaints that GSP had Vaseline applied to his back by his cornermen lead to the now-infamous “Greasegate” and a changing of the rules. Allowing the only official cut me to apply the substance in any future competitions.

And now the Prodigy is back and scheduled to fight Frankie Edgar in the Summer of 2014, for a third and what must surely be the final time to finish off their long-standing trilogy. When the two meet, Edgar will not have fought since July 2013, while Penn was last inside the octagon in December 2012. Will ring rust be a factor for either fighter, its hard to say.

But we have recently seen Penn training at Nova Uniao, somewhere he is very familiar with having secured his black belt there way back in the day, under the tutelage Andre Pederneiras. However these days it is more well known for being the fight stable of Jose Aldo and Renan Barao. If ever there was an academy to put that desire and hunger to compete back into the prodigy, that is the place.

The Return Of Baby J

Will this fight signal the return of who in many peoples opinions, could be considered amongst the GOAT. Even Anderson Silva himself placed Penn in and around that first or second slot for that accolade. Granted he didn’t want to give himself that honour but coming from him that still says an awful lot.

Let’s hope that this latest version of BJ Penn offers us a true glimpse of what made the former multiple times world champion, such a highly regarded and loved fighter. A competitor who paved the way for the lighter weight division fighters to go mainstream and to who many of which still owe a huge debt of gratitude.