When the landscape of modern fighting is looked back on, some names will burn brighter than most – refusing to be dismissed by history. One such name is that of BJ ‘Baby Jay’ Penn.

This Saturday, when a 38-year-old Penn takes to the Octagon in Arizona to square off against Yahir Rodriguez, it will mark one more compelling chapter in the career of a man who has never truly stopped fighting. If the hard truth of it is to be told, this is not always a good thing.

Born and raised in Hilo, a poor island province of Hawaii, he hailed from the type of small-town that required you to fight for your place in the male social hierarchy. He regularly tussled with his three brothers and later, the other island boys – some far older than he. In that insular world, fighting with your hands and wits is synonymous with showing who you are.

From these beginnings, a mindset formed in Penn that would ultimately shape who he was to become. The idea was simple, that when all else failed put both fists in front of you and wade forward. Indeed the simplistic slogan that was emblazoned on his walkout shirts was to become his constant mantra: Just Scrap.

Nicknamed ‘The Prodigy’ for his rapid grasp of Brazilian Jiu-Jitsu, Penn captured a black belt within 3 years of training in a sport that typically takes a decade of the graft to do so. He cut his teeth under the tutelage of Ralph Gracie, where his aggression and uncanny flexibility took what is typically a reactionary style of fighting firmly into the offensive. After he was done becoming the first non-Brazilian to win a World Title in BJJ, the burgeoning world of MMA caught the Hawaiian’s eye.

Introduced to Lorenzo Fertita and Dana White by a mutual friend, they instantly identified something special in the young man. Typical UFC rules of requiring fight experience to compete were ignored, and BJ set about barrelling his way through contenders one by one until a decision loss to then LW champion Jens Pulver handed him his first taste of defeat. BJ was visibly devastated, but refused to quit. Surrender was not in his DNA.

When BJ suggested he fight Matt Hughes for the Welterweight belt, a weight above him – he was greeted with wide eyes. Not only was the weight difference a challenge in itself, but Hughes was also the five-time defending champion, dominating anyone silly enough to step in against him. The idea of BJ being able to contend with Hughes superlative wrestling stretched the bounds of possibility. Fertita, historically a fan of fighters who take on formidable hurdles, granted Penn the shot. 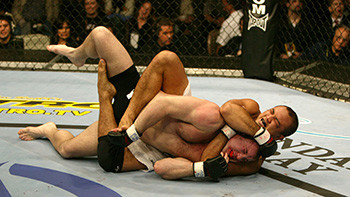 Come Fight Night, the type of momentary magic that can only occur in the furnace of combat sports was alive and well. Early in the first round, Penn flung Hughes to his back, which was a surprise in itself.

With Hughes staring up at him from the deck, Penn shunted his upward stretched legs aside, then swung down like a monkey from a vine and belted him on the chin. Hughes speaks of the punch in admiration, admitting he had not taken BJ seriously until that moment.

From then on Hughes was totally at sea, and could do very little as a dogged Penn took his back and tapped him out. The famous image of the time is BJ held aloft, slapping himself in disbelief at having at last taken the title.

Makeing the Move to Asia

This type of victory would set the tempo for his career. Penn’s style has always had a heart at its core. He would always keep coming, keep taking on the impossible at any expense to his body or legacy. This was never more apparent than his sacrifice of the UFC strap for a series of fights in the Japanese K-1 promotion. White recalls in amazement how Penn called him from Saitama, having signed with another organisation.

Penn was duly stripped of his belt. He would fight far larger men during his stint in the Far East (including a defeat to future UFC LHW champion Lyoto Machida) and though he won all his other bouts, there were omens that he would continue to fight anyone, anywhere, regardless of the logic.

When he returned to the UFC in 2006 he would suffer his first UFC loss in 4 years, which was quickly followed by another. Following Fertita’s advice, BJ would drop back to lightweight and make the run for which he will be remembered.

First, he avenged his loss to Pulver, before facing Joe Stevenson for the vacant LW title. A slicing elbow opened a gusher on Stevenson’s forehead and it wasn’t long before a BJ sunk the choke that secured him his second belt – at the time he was only the second man to have won a title in two weight classes.

Once again Penn looked to the spectacular – elevating to Welterweight to attempt and take both crowns simultaneously, but was foiled by GSP. He would win twice more at his lightweight before the inevitable winds of change began to blow. BJ would one win just fight in his next seven and drop his lightweight belt to Frankie Edgar in the process.

A Palpable Sadness on the Mic

He was badly brutalised in those fights, looking slow and stiff, often leaving with bulbous bruises cocooning his face. In his last bout, after a battering by Frankie Edgar, a solemn Penn croaked into the mic – ‘I don’t want my daughters to see me like this,’ he said. That was two long years ago. 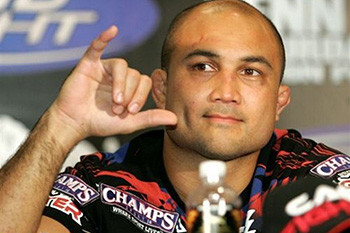 To see him interviewed, the man is soft-spoken, the trace of a grin never far from his lips. Behind the smile however, there is a palpable sadness, as well as grit that suggests no matter what accolade he achieves in his lifetime, the street fighter from Hilo will never be fully satisfied. And so, under the expert coaching of Albuquerque’s Jackson/Winklejohn outfit, he makes the walk once more – perhaps for the very last time.

It is the way of sport and nature that young follows the old. The body cannot live up to the demands it once did, despite the minds fervent protests to the contrary.

This is doubly true in MMA, where the lighter gloves make your body pay the price for every blow. His opponent is known for his youth, vicious speed and spectacular knockout kicks. The question pervades – if BJ can climb the mountain and stop the man 15 years his junior this weekend, what can be won that he has not already attained?

He is already a Hall of Famer, financially comfortable, with a beautiful young family. It must be assumed that whatever it is that whispers to him at night, suggesting he rise up and go to the well one more time – will never truly go away. In attempting to appease his hunger over and over, as so many elder fighters do, what price will he pay in the long run? Time will tell.

BJ Penn takes on Yair Rodriguez in Phoenix Arizona on BT Sport 2 at 3 am GMT this Monday, January 14th