“The greatest martial artist on the planet”

From a young Bruce Lee fan to one of the most beloved Mixed Martial Artists in the sport’s young history. The Bas Rutten journey through MMA is one of the most interesting tales the sport has.

Having started in Tae Kwon Do, Rutten began his fighting career at aged 20. Whilst working as a bouncer in native Holland, Bas put his Tae Kwon Do and Kyokushin Karate training to work as a kickboxer. Rutten would win his first 14 fights before suffering a knockout loss to fellow Dutchman, and knockout artist Frank ‘The Animal’ Lobman.

It was a fight that Bas, notorious for his love of the party lifestyle when the opportunity allows, accepted whilst under the influence of alcohol. ‘El Guapo’ moved on from kickboxing with a 14-2 record. As the bright lights of Pancrase called.

Founded by Japanese Pro Wrestlers Masakatsu Funaki and Minoru Suzuki. Pancrase was an MMA-Wrestling hybrid that was famous for very much blurring the lines between MMA and its scripted cousin. With punches outlawed, Bas discovered a way to do damage with a fearsome open-palmed strike. Which he knocked Ryushi Yanagisaw out with on Pancrase’s first-ever show.

It would also be in Pancrase where El Guapo would be introduced to the world of grappling as he would be tapped by Catch-as-catch-can trained Masakatsu Funaki and Catch icon, Ken Shamrock. Rutten would begin work with Funaki after his defeat to the Pancrase co-founder. Funaki would teach him the shootfighting style that Bas Rutten would hone and improve upon throughout his time in the promotion. 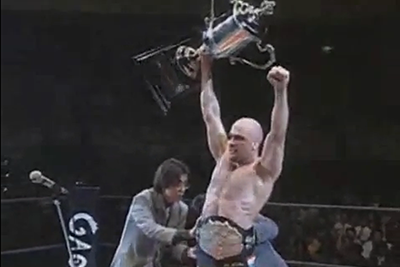 After losing a close decision to previous foe Ken Shamrock’s half-brother Frank, Bas spectacularly made Manabu Yamada go unconscious with a head and arm triangle. Earning him a rematch against Ken Shamrock for the King of Pancrase title. Shamrock would finish him in just one minute with a kneebar, which Rutten admitted he did not know how to escape.

Following this contest, El Guapo would double down on his grappling. Rutten would learn from his defeats and string together an undefeated run that took him from 7-4 to a hugely impressive 28-4-1. Including 11 submission victories in a run that would cement his legacy.

Though Shamrock would continue to fight in Pancrase, it was clear his eyes were on the UFC now. Where he would compete in high profile bouts with Royce Gracie, Dan ‘The Beast’ Severn and Kimo Leopoldo among others. This would leave the field relatively open for an improving Rutten, who would go on a destructive run that included multiple wins over Frank Shamrock, Jason DeLucia and future UFC pioneer Maurice Smith.

As well as a victory over Minoru Suzuki and avenging his first career defeat to Funaki. Rutten would eventually leave the promotion as a 3 time King of Pancrase. Riding a 19 fight undefeated streak and as having avenged every defeat on his record bar those at the hands of Ken Shamrock.

In 1998, El Guapo made a long-awaited entrance to the UFC where he was hyped to the moon. Promoted as ‘The World’s Greatest Martial Artist’. Rutten entered the UFC to take part in a tournament to crown a new UFC Heavyweight Champion. Randy Couture had recently left the UFC amidst a contract dispute after being matched up with Rutten, and would eventually sign for Vale Tudo Japan (whereupon he would be arm barred by Enson Inoue in 90 seconds).

Rutten at UFC 18 Against Kohsaka 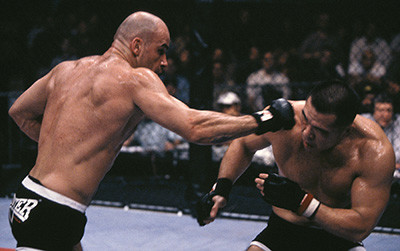 At UFC 18, dubbed ‘The Road to the Heavyweight title’ Rutten would face Japanese MMA stalwart Tsuyoshi Kohsaka. A legendary guard player who Rutten would stop in dramatic fashion after 14:15 of a scheduled 15 minutes.

Two months later at UFC 19: Ultimate Young Guns (who else misses named cards?) Collegiate wrestling monster Kevin Randleman would decision Maurice Smith to set up a clash with Rutten at UFC 20: Battle For the Gold.

Randleman took Rutten down early and punished the Dutchman from top position, opening up a cut on Rutten’s face. After Big John McCarthy stood the fight up again to examine and clean Rutten’s cut. Bas Rutten landed a devastating liver shot, his trademark upon recommencing that slowed Randleman down for the rest of the fight.

Despite ‘The Monster’ spending much of the rest of normal time on top, Bas’ activity from the bottom allowed the fight to go to overtime. Two three-minute overtime rounds followed much of the same pattern. But eventually, Rutten would earn a decision victory, in the days prior to the 10-point-must system. Whilst Randleman maintained top position throughout the fight. His lack of interest in improving position convinced two of the three judges (including Dan Miragliotta) to give the fight to Rutten.

El Guapo took the decision to drop down a division afterwards, where men his sizes, such as Frank Shamrock and Tito Ortiz competed. However a multitude of injuries from Bas’ famed hard training finally caught up with him, and he retired from the sport. Rutten would take up a seat in the Pride FC commentary booth, endearing him to a whole new era of MMA fans.

El Guapo would first sit next to The Fight Professor, Stephen Quadros, and eventually the equally hilarious Mauro Ranallo and would thrive in his new role. Famous for his knowledge of the sport, charismatic personality and sharp sense of humour. Bas Rutten would take to broadcasting as well as any former fighter ever.

The itch was still there, however, and in 2006 it was announced he would be taking on UFC legend Kimo Leopoldo in John Lewis’ World Fighting Alliance. Kimo would fail a drugs test just a few days before the fight and was replaced by journeyman Ruben ‘Warpath’ Villareal. Who Rutten would stop with brutal leg kicks in the first round.

Following the demise of Pride, Rutten would continue his broadcasting career by taking the co-anchor role alongside Kenny Rice on HDNet’s Inside MMA. Rutten would also return to the booth, doing commentary alongside Rice for DREAM.

And recently World Series of Fighting alongside longtime play-by-play man Todd Harris. Rice has recently been replaced by Rutten’s former partner and longtime friend Mauro Ranallo. Alongside whom Bas Rutten also hosts a regular podcast ‘Rutten and Ranallo’ which comes with a personal recommendation from your writer.

Though Rutten did not have the multitude of fights in Pride or the UFC that many of his fellow UFC Hall of Famers have. His career is one of the most impressive and fascinating for the old school MMA fans. His broadcasting, commentary and podcasting is a joy to listen to. An intriguing, engaging character, Rutten left the sport with his faculties still intact, which his students at EliteMMA in California will be thankful for.