What a year it has been for the unified world boxing champion Anthony Joshua. The Brit who has seen a meteoric rise through the ranks of heavyweight boxing, starting out in his career as a professional against Emanuele Leo at the O2 Arena in Greenwich. And just 4 short years later, defeating one of the all-time greats Wladimir Klitschko. In their IBF, IBO and WBA world heavyweight title bout.

It was a fight, many thoughts had come too soon for the young champion, but Joshua showed amazing tenacity, durability. And desire to come back from a potentially fight-ending knockdown in the sixth round. To finish off the former champion Klitschko in emphatic fashion. Confirming his status as the current biggest name in heavyweight boxing.

And now Joshua now sits on the cusp of yet another great accolade. As the man from Watford seems poised to earn one of the most revered awards amongst British athletes, in Britains Sports Personality of the Year. With the odds-on favourite seemingly once again destined to add yet another achievement to the ever-growing list on his fairytale run.

Now currently in camp, as he prepares to defend his heavyweight crown. Joshua who was originally slated to fight top contender Kubrat Pulev, now faces Frenchman Carlos Takam on October 28th at Cardiff’s Principality Stadium, following an injury which forced Pulev to withdraw. 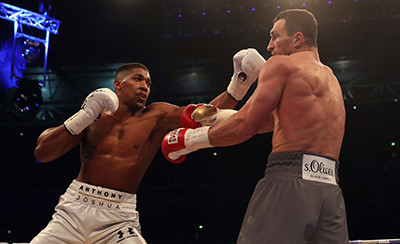 Joshua who we understand was of course not at all happy with the Pulev pullout. Having already lost out in a potential rematch with Wladimir Klitschko. Would no doubt gain consolation with a win over Takam. Followed by him being awarded the SPOTY, come December 17th at Liverpool’s Echo Arena.

With a win at the ceremony making him just the fifth boxer in the awards illustrious 63-year history to take the top gong. Alongside fellow pugilists, including Henry Cooper, who took the award on two occasions. Barry McGuigan, who became the first recipient born outside of Britain to win.

Will the stars align yet again for Anthony Joshua in 2017. And finish off his greatest year to date with the award to match? Watch this space…