Taking A Look AT The UFC Welterweight Division

Tyrone Woodley was supposed to face off against Johny Hendricks; however, the bout was cancelled due to weight cutting issues on behalf of Hendricks the day before the fight. This sparks a whole other debate on the subject of weight cutting in MMA, but we will leave that for another day. It’s now been confirmed that Woodley will get the opportunity to fight the winner of Carlos Condit and Robbie Lawler for the Welterweight title.

After pulling out from his fight with Tyrone Woodley, Hendricks will have to fight another top Welterweight in order to get back in line for a title shot. This will no doubt slow down his journey back to being champion. Fighting Rory MacDonald would be a fight that would make sense now. They are the only two fighters in the top five who haven’t fought one another. It would really clear up where everyone stands in the division and would be a really exciting fight for the fans.

After losing to Robbie Lawler for the welterweight title in July 2015, we were left with the question as to what was next for MacDonald. I think he’ll have to string together two more wins in order to be considered for the title again.

His next fight has been rumoured to be against Hector Lombard in early 2016. They were scheduled to face off at UFC 186 however; the bout never materialized and was pulled from the card. Since Macdonald is healing up some injuries sustained in the Lawler fight, and Lombard’s suspension for testing positive for performance-enhancing drugs in his fight against Josh Burkman ends January 3rd, the two will probably face off in the early months of 2016.

There are a lot of other potential candidates names that come to mind, but I think it’s possible that he’ll fight either the rising star Stephen “Wonderboy” Thompson or Matt Brown. At only 26 years of age, MacDonald is one of the most skilled fighters in the division, and we will no doubt see him make another title run.

I will do my best not to sound like a schoolgirl who has a crush on one of the boys in her class here, but CARLOS CONDIT IS BACK!! After suffering a knee injury at the hands of Tyron Woodley and taking more than a year away from the sport, Condit has made a triumphant return with a TKO doctor stoppage over always game Thiago Alves. And now Condit is set to challenge the champ for his belt on January 2nd, 2016.

Though many might be disappointed in this decision as he lost two decisive fights against Hendricks and Woodley already, I think we will be surprised once again on how much talent this guy has. Remember, he dropped GSP in their title fight at UFC 154.

This elusive top 10 welterweights has been all but swiped under the rug. The UFC veteran of 15 fights has compiled victories over Matt Brown, TJ Grant, Nate Diaz, and most recently a third-round submission over Josh Burkman. Now it seems the UFC might be using him as a stepping stone for up and coming talent. He is set to face up against Jorge Masvidal at UFC fight night 79 at the end of November. If he wins that fight, perhaps he will be given another chance and fight a top 5 fighter.

Welterweights on the Rise 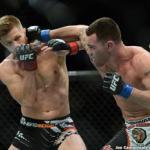 Other fighters working up the Welterweight ranks: